The Government and the HSE’s misleading graphs

Since around last week the HSE and the Government started claiming that the lock-down measures were working. Today Minister for Health, Simon Harris tweeted some science with which we can contend with (albeit not much). It’s a graph from the HSE’s modelling group which he upholds as evidence that the lock-down is slowing the growth rate of the virus. 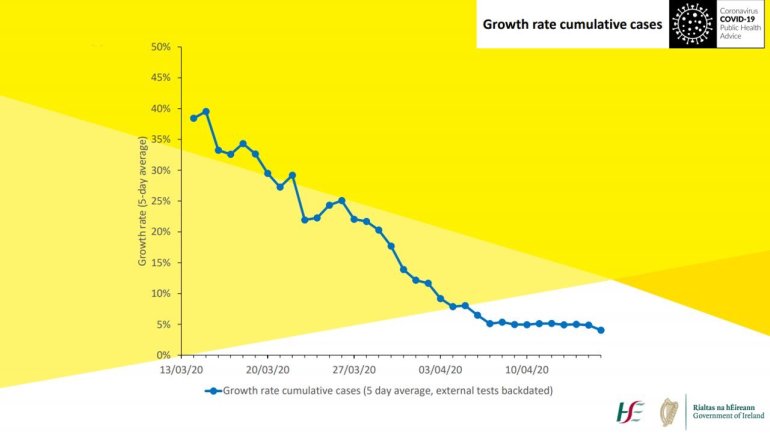 It’s worth noting that at the time of writing the HSE has not published the data behind this curve or any of its underlying assumptions.

This type of graph, known a growth rate curve is supposed to show if the trajectory of infection is getting better or worse. A growth rate of 30% on the graph would mean that the cumulative number of cases is growing by around 30% every day. A 100% would mean the cases were doubling daily.

A flattening of the curve would require a fall in the rates, which, indeed, on this graph they are. This looks like good evidence that the lockdown measures are working right? Wrong.

What Mr Harris’s tweet fails to take into account is the number of undetected cases due to limitations in testing. The Government could be reporting a misleading drop in the growth. As Dr Jack Lambert of the Mater Hospital points out how: “How can you talk about flattening the curve where you’re testing such small numbers of people and people are queuing up to get testing?”

“And then there’s results that are pending for a week, so the numbers represent our lack of supplies for testing rather than flattening the curve.”

On April 13th the HSE’s goal was to carry out 4,500 lab tests per day by last week, and that on Saturday, only 7,900 tests were carried out. Perversely a rapid growth in the number of tests being conducted could lead to a rapid increase in the growth rate.

Unless the HSE could test everyone in the country every day for the next year (a costly and impracticable exercise) we will never know how prevalent the virus is, particularly for a disease in which 80% of cases experience mild or no symptoms.

The HSE could easily have annotated this chart to note these uncertainties as the US CDC regularly does for their data, but they chose not to. So no Mr Harris, I don’t believe your misleading graph proves lock downs work.

View all posts by freeideas12